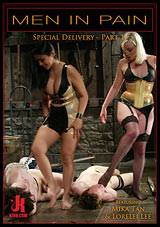 Elliot Skellington and Judas were having a rough day. They had fallen badly behind schedule and were very late making their last delivery. The problem was that their last delivery was for Mistress Mika Tan and Lorelei Lee, and the two dommes were not willing to let this pass.